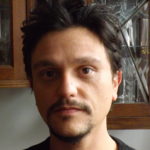 Where does the modern address originate from? On the transformation of the salutatio formula in the superscription

1. In the long history of epistolary communication, some elements imprinted on letters are not well studied and among those, up until a few years ago, were the addressing formulas used to respectfully address the recipient. The interest in this topic by sociolinguistics is recent and in terms of philology and literary criticism it deserves attention, as this element is so closely linked to sending and receiving messages.

“The set of indications (essentially composed of the name, last name and address of the recipient), to identify the recipient of the letter, the parcel or the envelope, usually written on the envelope or (particularly in the past) on the outside of the folded sheet used as stationary.”

Actually, over the centuries this word has indicated functions very different from the one just pointed out. One of the oldest references to this specific section of the epistle can be found in the Candelabrum by Bene da Firenze, a treatise of ars dictandi, which dates back to the first quarter of the thirteenth century. According to Bene, it must have had a predominantly mnemonic function intended for the messengers, generally considered unreliable subjects, so they would not forget to whom the letter was to be delivered.

“The title (= titulus) is written in the outer margin, so the messenger knows with certainty for whom the letter is intended, since the messenger might forget.”[1]

Others in that period would have described what Bene referred to as a superscription. An illustrious Florentine notary, Brunetto Latini, the famous teacher of Dante, uses the exact description of titulus from Candelabrum by Bene in one of his passages in Rettorica:

“But the title of the epistle is the external superscription, which informs us of who the recipient of the message is.”[2]

This is most likely the oldest vernacular definition of superscription in the history of European epistolography. 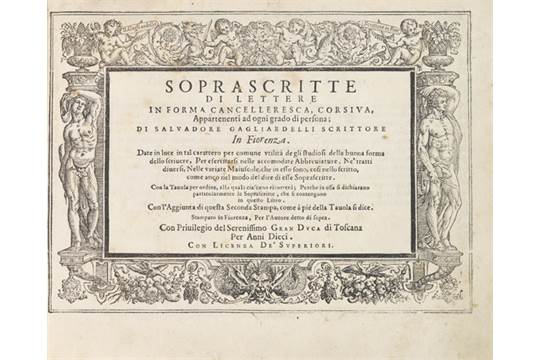 2. Medieval theorists did not pay much attention to the aforementioned superscriptions in their treatises. Instead, they paid a lot of attention to the salutatio,[3] which is another fundamental element of the epistolary paratext. This was a way for the sender to convey not only greetings but also respect to the recipient. It had also the function of capturing the goodwill of the recipient (captatio benevolentiae). In fact, a salutatio that did not follow protocol could upset even consolidated diplomatic balances.[4] The protocol demanded that subjects were mentioned according the hierarchical order of titles associated to their social position (e.g. religious, noble or professional). For example, a salutatio sent by the pope to the king of France should adhere to the following pattern:

The salutatio generally comprised three parts. The first part was called intitulatio, it reported the sender’s name and titles and was expressed in the nominative case (Clemens episcopus, Servus servorum Dei). The second part was called inscriptio and was reserved for the recipient’s data expressed in the dative case (dilecto Filio in Christo et illustri regi Francorum). The third and final part was the closing of the salutation; a set of words to convey greetings (salutem et apostolicam benedictionem). 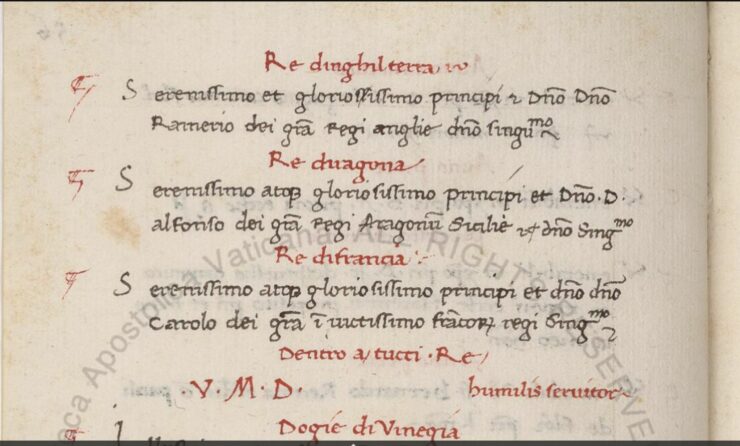 The growing development during the fifteenth century of familial correspondence made even private letters a focus of interest to epistolary treatises. Initially, some theorists noticed the excessive formality of the traditional salutatio and judged it to be outdated. In the Rhetoricale compendium, for exemple, Bartolino da Lodi, professor of grammar and rhetoric of the fifteenth century, renounced treating this formula as salutatio:

“It is not commonly used, except for public or open letters in the ecclesiastical or secular court.”[6]

Since in private letters it was the first section that the recipient would read, authors of manuals on the art of letter writing associated its function with that of a captatio benevolentiae in the art of rhetoric. In fact, the rules governing the formulation of the superscription seem to have been based on those related to the salutatio, to the point that it can be reasonably assumed that this new formula derived from the evolution of the traditional greeting formula. A prime example can be obtained from the collection attributed to the Florentine chancellor Leonardo Bruni. Besides the Latin formulation, this particular text contains a vernacular version as well:

The recipient’s name is also expressed in the dative case just as it is done in the salutatio. The difference between this formula and the ancient one is the fact that intitulatio and salutatio are now definitively omitted.

Another fundamental element of private letters (or rather “non-official” letters) neglected by traditional treatises was the so-called introscriptus. This section of the letter was an inscription placed at the head of the letter to open with; to occupy the space previously reserved for the salutatio. It was very similar to that indicated with the superscription, only it was expressed in vocative case. An example taken from a late fifteenth-century Bolognese manual in which the superscription (on the outside of the letter) and the introscriptus (on the inside) are mutually associated:

Moreover, the fact that the introscriptus derived from the superscription is also confirmed by the Tractato de li ditamini, which is the oldest printed manual on epistolography in the Italian vernacular, which teaches:

“Who wants to write a letter, starts from the superscription and forms the introscriptus from this, changes ‘o’ in ‘e’, the dative case in the vocative case.”[9] 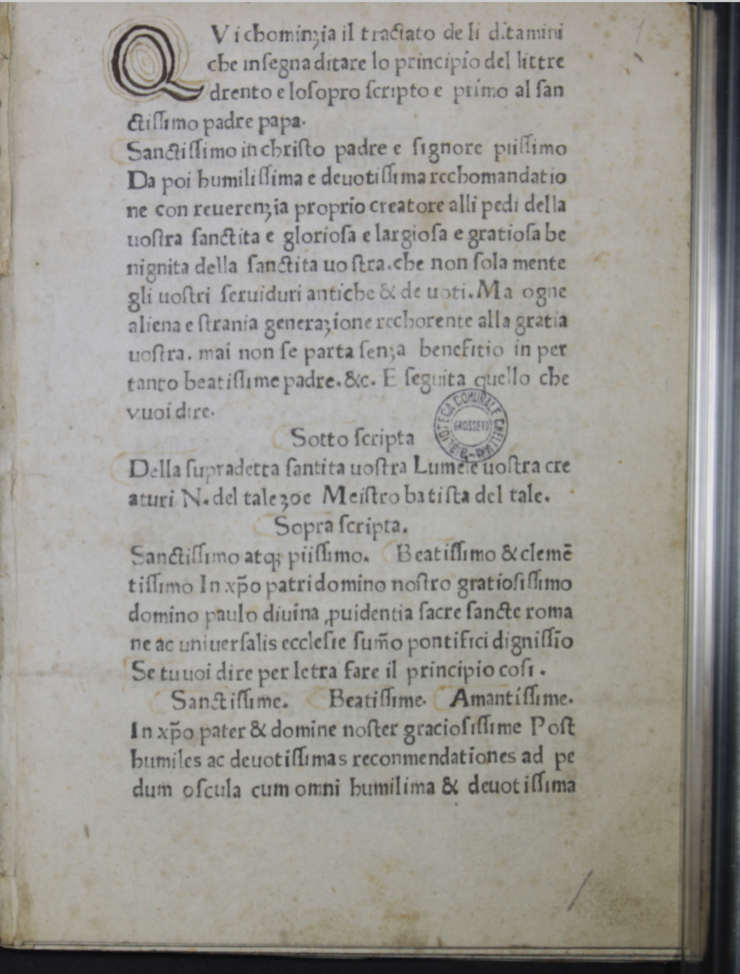 3. The medieval letter writing manuals did not treat the superscription and introscriptus and that might explain the proliferation of handwritten lists of superscriptions and introscriptūs, preserved in various Italian libraries, since the fifteenth century.[10] The first printers sensed the commercial potential of these manuals, which were published in both Latin and vernacular. Among those printed in Latin is the Principia, subscriptiones et suprascriptiones litterarum missivarum, printed in Rome around 1475 and the Inscriptionum libellus by Giacomo Zaccaria, which was probably printed in the same city in the 1480s. Among the texts (partly) in vernacular worth mentioning are the previously cited Tractato de li ditamini, which contains numerous formulas; the anonymous Soprascripti et introscripti di lettere, whose editio princeps was printed in Florence by Sanctus Iacobus de Ripoli in 1480 and the Suprascriptiones litterarum by Giuliano Rivanelli printed in Venice around 1490. A large list of superscriptiones can be found in the appendix of the most famous manual of epistolography in ancient vulgar Italian of that period: the Formulario di epistole missive e responsive by Bartolomeo Miniatore/Cristoforo Landino (Bologna, Ugo Rugieri, 1485). 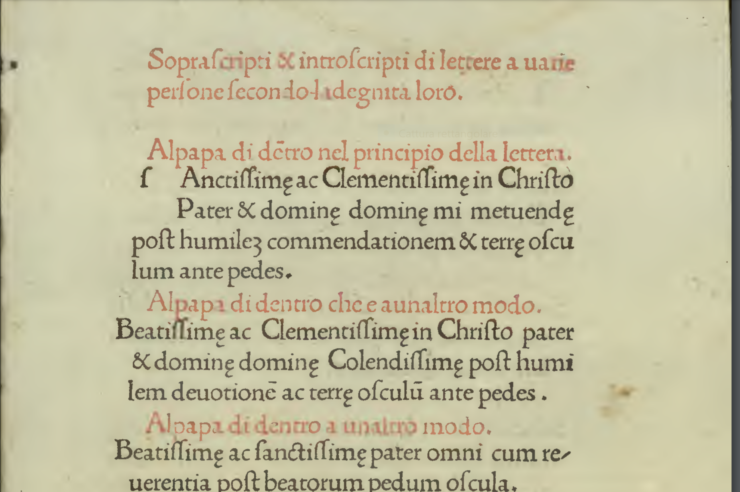 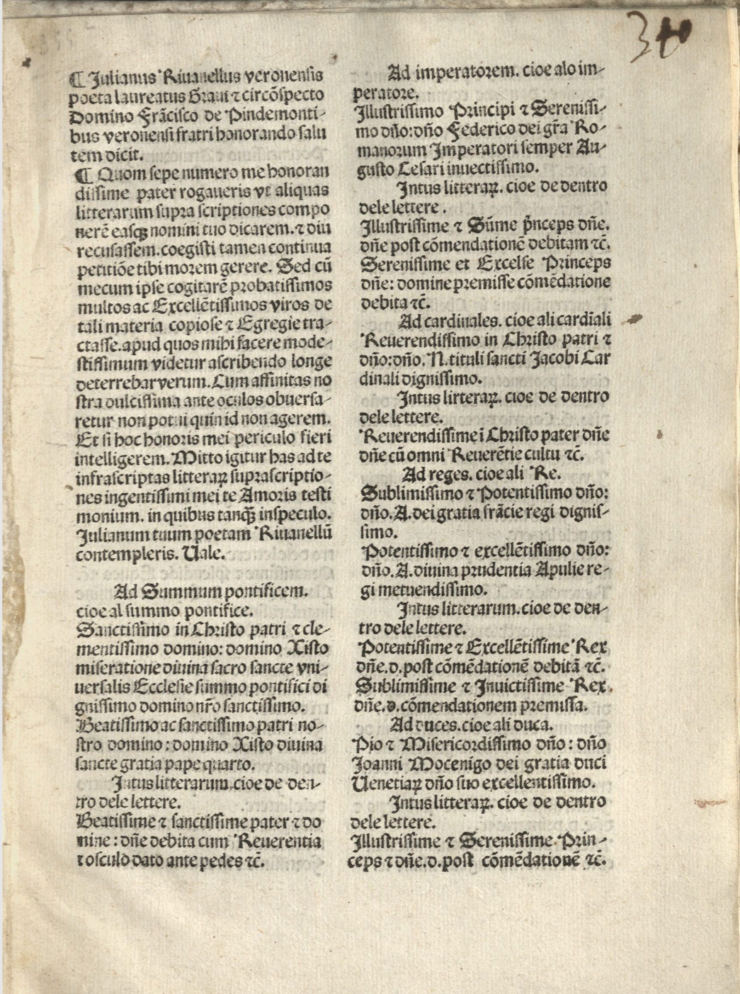 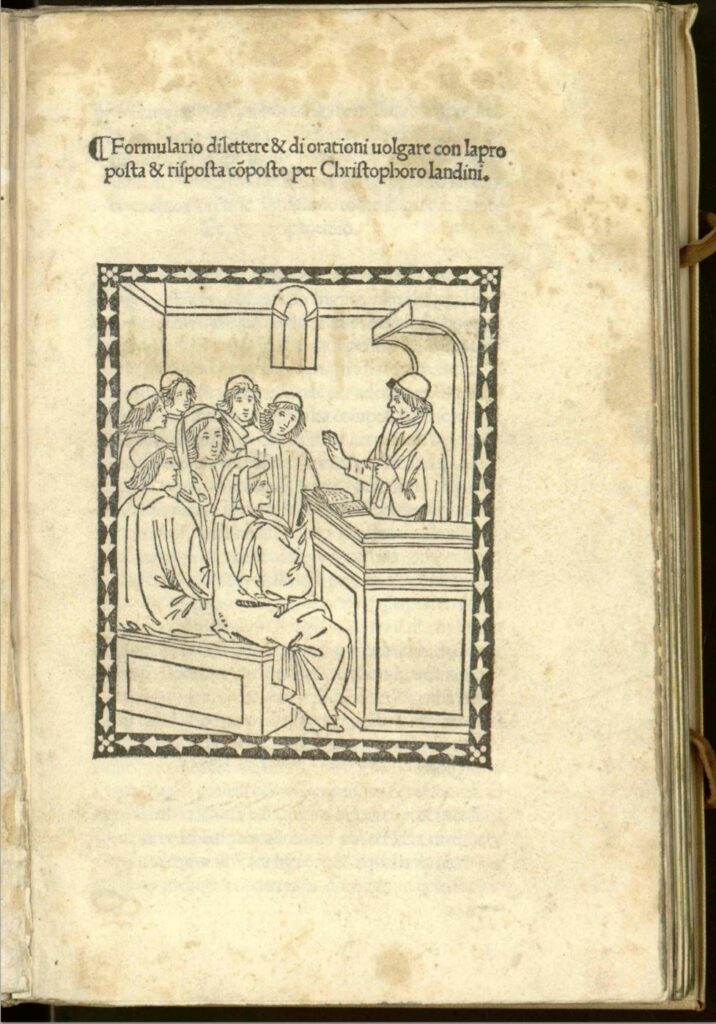 As expected, lists of superscriptions were still printed far into the sixteenth century, the golden century of Italian epistolography. Giovanni Antonio Tagliente added at the bottom of each letter model, some examples to compose superscriptions and subscriptions in his Componimento di parlamenti, printed in Venice in 1531. A father, who wanted to write a letter to a son studying away from home, had to compose a subscriptio in the following manner: Tuo padre Simpliciano di Polidoro, while the superscription had to follow this formula: Al modesto et virtuoso Pindaro di Polidoro Tarentino in Siena studiante, figliuolo carissimo.

Unlike the ones in the previous century, superscriptions and introscriptūs collections from the sixteenth century are often accompanied by theoretical or socio-historical considerations. In the Secretario by Francesco Sansovino, published for the first time in 1567 in Venice, the famous polygraph noticed the transition from the traditional salutatio to the introscriptus on which we focused in the previous sections:

“The Romans used their proper names at the beginning of their letters, so the reader would know who wrote them. Then they added the following formula: (Marcus Tullius Cicero). Si vale bene est, ego quidem valeo. We have  changed the language and the customs by writing our name last at the bottom of the letter and instead of the salutatio we write the following ceremonial words: Signore mio osservandissimo (or similar other words).”[11]

Sansovino reflected further on the relationship between captatio benevolentiae and the superscriptio, cautioning:

“We must be sure that the superscription is well written, because it is the first part of the letter to be read by people and therefore the first words with which, or in gratitude, or in disgrace, the writer addresses the reader. […] And then we add the following titles: 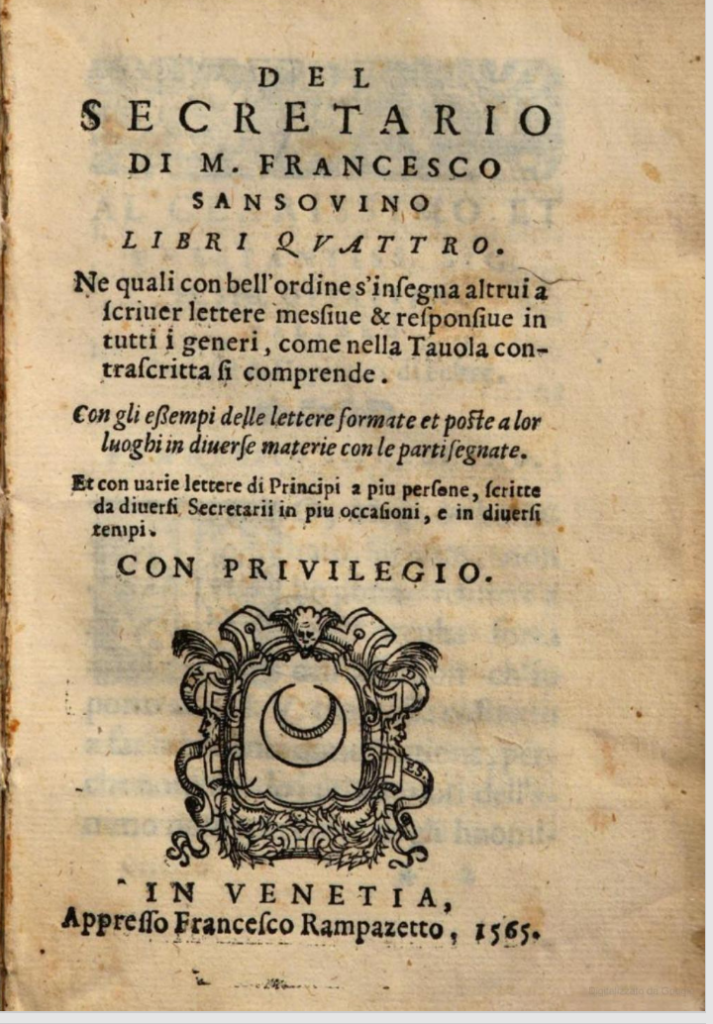 In his Inscrittioni et soprascrittioni delle lettere missive a qualunque grado e qualità di persone si voglia published in Perugia in 1575, Francesco Giovanni Pellippari reflects on the similarities between the formulation of superscription and the introscriptus:

“Dear reader, you will notice that the inscriptions that are used at the beginning of letters, before writing anything else, such as: “My dearest friend” or “My honoured Sir” and the like, must be the same as the superscription, i.e. on the outside of the letter after sealing it or on the envelope.”[13] 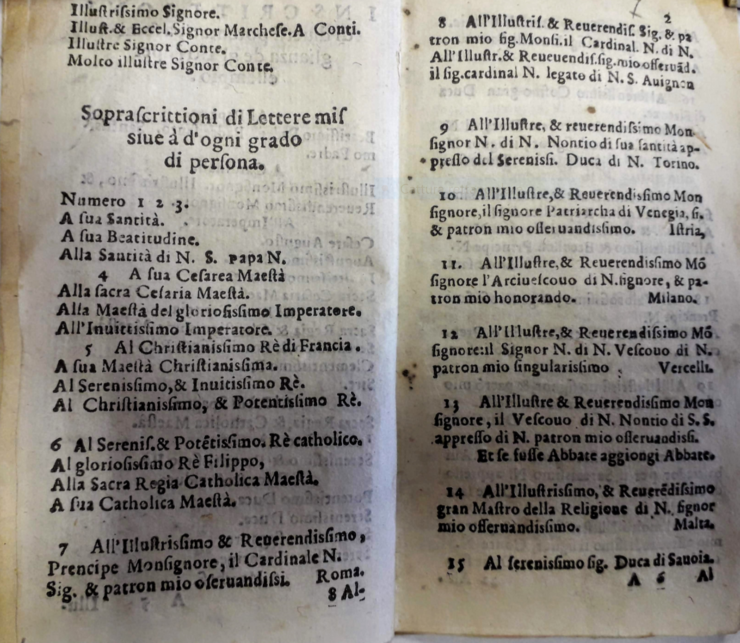 Finally, It can be noted, that the letters described by sixteenth-century theorists are profoundly different from the ones described in the medieval manuals, but are however quite similar to the ones in use today, including electronic correspondences.

[10] Collections of medieval superscriptions are available online at: