Networking History: An Impression of the Sunbelt Conference 2018

The XXXVIIIth International Sunbelt Social Network Conference, taking place this time in Utrecht, has just finished. It featured a series of panels about Historical and Archaeological Network Analysis. What an inspiring couple of days it have been!

It was not obvious from the start that this was going to work. For me, the conference was no happy reunion with colleagues from abroad with whom I have built up an acquaintance over the years. No, this time I found myself often lost in the busy foyer where coffee was served, desperately searching for a familiar face. And everybody else seemed to know one another: in my analysis, I was no part of this clique: as an isolated node I had flashbacks to conferences in the early stages of my career, when I only managed to strike up a conversation after I had finally and nervously presented my paper. It was only then that more experienced scholars, who had showed mercy on me by being among my painfully small audience, were kind enough to invite me into their conversations. These past few days, I felt like that again: anonymous, a nobody. And like I did in the early days, I made my way to the book tables, to see what it was all about. Feeling overwhelmed by some of the presentations, I also sometimes stole out of sessions and sneaked into the familiarity of my office building right around the corner (what a privilege). But there, close colleagues stopped me in the corridors, “Hey, I see hundreds of people walking around outside with thoose badges; what’s going on?”

Giving the answer, I felt the strength of a weak tie. Suddenly, Manuel and I were no longer isolated nodes hardly tied into the network of sociologists anymore. We constituted not nodes, but in fact a tie linking on the one hand the hub of the organising sociology department and on the other the hub of our own department of history and art history.

New kids on the block

As historians interested in network analysis, these past few days we have rapidly developed ties with other historians who feel that they are new kids on the block. We work with dirty data that take discouraging amounts of time to assemble into databases. That precious time is not financed by funding agencies, because these ask for the development of innovative tools, and refuse to sponsor something as dull and seemingly unchallenging as transcribing data from archives. I guiltily dream of sweat shops of typists, or of crowds eager to spend their Saturday evenings usefully by competing with other science-citizens in transcribing the texts the SKILLNET project needs, or of machines that flawlessly OCR handwritten texts, with expert Latinists waiting eagerly to check every line. In reality, the problems pile up underway: nauseating numbers of deduplications and disambiguations or proper names, or the opposite: having to collapse variants of the same name that increase in despairing tempo’s while we work our way through stacks of paper. And there are the issues in solving missing dates and negotiating the use of different calendars – problems almost more intricate than the ones that drove generations of early modern historical chronologers to the brink of mental breakdowns.

Yes, I was thirsty for some inspiration. And did I get it. It has been a long time since I was treated to such an exotic menu of case studies. Why did I care? Because this was in many ways a conference turned inside-out: we knew nothing of each others’ datasets, that pertain to the spread of Roman fibula-designs, to medieval English charters rendering different types of edges, to Portuguese naval administration, to urban economies of Naples in the 19th, or to Jewish urban social networks in Cracow, spanning the globe from networks of people around Confucius in ancient China, via 9th-c. sufi networks in Iraq and via Canadian Mountain police in the 19th c., west of Manitoba, on to General Relativity networks in the 20th century. But we are all coming to grips with creative visualizations of highly diverse sets of parameters.

Suddenly, I was talking with historians of the 20th century again, with historians of economy, with archaeologists. And visiting panels on other themes in between, I saw my optimistically started ‘list of seminal articles in network theory to read’ grow under my hands while frantically making annotations that burst out of the margins of the conference program book – margins that were narrowed to the max in order to fit the program with its 10 columns of parallel sessions on to one page opening for each time slot. 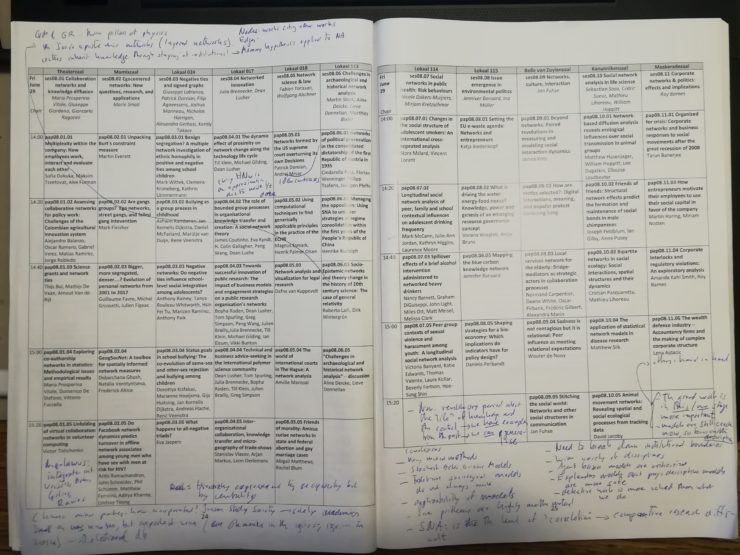 So what did we learn? First of all: as historians, we are just beginning. The first issue of the Journal of Historical Network Research has just been published, the first meetings in which we put our methods central are now taking place. Historical network analysis is not new, but with the rapid integration of competing systems of relational databases and visualisation software, the threshold is lowered to master technical skills.

Second, we are still busy spending most of time mapping and charting and doing descriptive research. This is safer than venturing explanations that can be generalized. Sometimes we take into account institutional or all sorts of historical contexts to explain diachronic changes, but we focus on cases. Often we try out different types of visualisations, searching for some kind of correlations. Comparative network research is a next thing on our agenda, but for that we need comparable datasets of different cases. Once we are comfortable in that stage, we might proceed to do actual modelling and use network analysis as a more explanatory tool.

Moreover, as historians we can conduct no interviews with our sources to compare perceived networks with observed networks. This transpired more than once from the presentations: many of our networks are proxies for actual social networks. Ideally we should work with layered networks, combining or comparing family relations, institutional relations, business-relations, correspondence networks, patron-client relations, co-citation networks, epistemic networks etc. A related problem which haunts us is the quality of our datasets: while on the one hand we are aware of the gaps (the known unknowns), we acknowledge a lot of noise and dirt in what we do have. Filling in gaps remains hazardous. But MA-student Richelle Boone came up with a smart way of doing so in scientific correspondence. It is crucial to acknowledge that epistolary networks in the Republic of Letters are reciprocal. This comes with the ideal of commercium literarium and with the early modern artes epistolicae that conceptualise the letter as a piece of a conversation between absent friends. Since this is particularly the case in small and dense networks, we can safely assume that contact via letters sustained over a longer period of time is reciprocal (in general, people might persist a while in trying to get an answer, but everyone gives up after, say, five attempts). In other words, correspondence-links are theoretically always symmetrical. This is time and again confirmed by letters in which correspondent start by thanking the recipient for a letter (often missing today). So if we have only half of an epistolary dialogue, we can supply ‘missing letters’ to our dataset (depending very much on the time-window we choose, as Richelle cautiously warned). This also means that authority and fame in the Republic of Letters can as a rule of thumb not be measured by directionality.

Richelle Boone presenting her research on the Birmingham Lunar Society

Fourth, there are technical challenges. Conducting multi-layer network research requires more advanced programming and mathematical skills. Our datasets themselves need more standardised parameters in order to make them compatible with one another. When it comes to networks of words in texts, NLP is still focused on modern languages, and predominantly on English. So citation analyses or Named Entity Recognition on Greek inscriptions, Medieval Latin and 16th-c. French are problematic.

But to end on a positive note about what we are already doing: I learned that many network historians inhabit a more global world than I do, with my focus on European history. I noticed that network historians are very interdisciplinary, and appear comfortable in thinking about social, cultural, economic and material links. They easily move in and out of the disciplines that come with those different types of edges. And finally, we all agreed this is just the beginning. The many positive tweets about the recent 5th DH Benelux Conference and the Digital Humanities Oxford Summer School show that we feel the urge and inspiration to teach ourselves, while being realistic about the outcomes. So join the network!

Thanks to Martin Stark, Aline Deicke, Lieve Donnellan, and Matthias Bixler for organizing the panels on ‘Challenges in Archaeological and Historical Network Analysis’; and to Eva Jaspers and Vincent Buskens for hosting the Sunbelt conference in Utrecht this year.