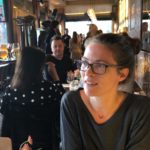 Ms 986: more than a hundred letters visualised in a couple of hours

As librarians, we are used to dealing with special material: we cover letters in acid-free paper, we tailor-make boxes for rare books and manuscripts, we make sure that old maps are transported and stored safely. We make sure material can be consulted by the public and finds its way back to the proper shelves in the storage rooms. We digitize huge parts of our collections and increase their availability. What we don’t do, however, is look at our material.

That is why we as employees of the Collection Services of Utrecht University Library (Metadata & Acquisition, plus Collection maintenance) organized an afternoon to look at a collection of our own manuscripts and attempt to decipher a number impressive, but rather illegible handwritings – manuscripts in Latin, that is.

After a short introduction by Dirk, SKILLNET’s project leader, we received a crash course in Latin and in Latin dates. Armed with dictionairies and considerable enthusiasm, we started to extract the metadata of more than a hundred letters and put these names and addresses of authors and recipients, and the dates of the letters, into a NodeGoat database. Although we had laptops at our disposal on which we could study the digitized versions of our manuscripts, zooming in proved a challenge.

The collection (shelfmark Ms 986) contained letters written by and addressed to the brothers Amelis and Joannes Rosendael in the period 1574 to 1650. Although the letters were digitized in high resolutions, facilitating detailed zooming in, it proved indispensable to have the real-life copies in front of us. Reading the different hands posed an enormous challenge. Most were very neat despite their illegibility, suggesting that they would be perfectly readable if one has the time to familiarize oneself with the script. Alas, there was no time, so we focused on those single sentences that seemed to contain dates.

The crash course in Latin datings came in very handy, although deciphering was still more difficult than translating. At least we had a rough idea of the periodisation. See the interactive visualisation of the correspondence network (if the visualisation is not visible, please use another  browser):

What I found fascinating, is that amongst the letters, we encountered a poem addressed to one of the brothers. Apparently, prose did not suffice for one correspondent to express his feelings. A group of colleagues noticed that the brothers adopted a less readable script if they wrote between the two of them, but switched to an extremely neat cursive when addressing their parents. These letters were also in Latin, with the exception of a student-like request from one of the brothers to his parents to send him an old shirt and trousers.

After a couple of hours of concentrated work, we had assembled quite a few metadata, and Dirk could show us a visualisation of our work. Most of the epistolary traffic went on between Gouda, The Hague and Leiden, while Utrecht was conspicuously absent. It felt very special to see these connections on a map. Socially, we could see the relative input of the letter writers. Contrary to expectation, there was almost no overlap with the previously charted manuscript collections Ms 983 and Ms 985. See the interactive visualisation of the epistolary traffic (if the visualisation is not visible, please use another  browser):

I found it very remarkable that we managed to collect so many data in such a short period of time with people not trained in reading old script. Knowing that there are many more letters in our storage facilities that have not yet been scrutinized, I am curious to find out what remains to be discovered next.