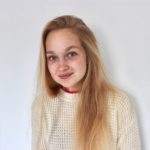 All about appearances and insults: Early modern biographies of scholars

Julius Caesar Scaliger’s (1484-1558) extensive insults and his son Joseph Justus’s (1540-1609) “venerable face”: early modern biographical writing often contained some noteworthy details. What Antoine Teissier (1632-1715) considered important to mention about Julius Scaliger, for instance, was that he called Erasmus a “parasite”. In a genre that was focused on scholarship, it is remarkable that details like these were included as well: they do not correspond to an image of serious intellectuals who occupied themselves with highbrow topics. The following example of early modern life-writing illustrates a way in which serious scholarship and something that is closer to gossip could come together. 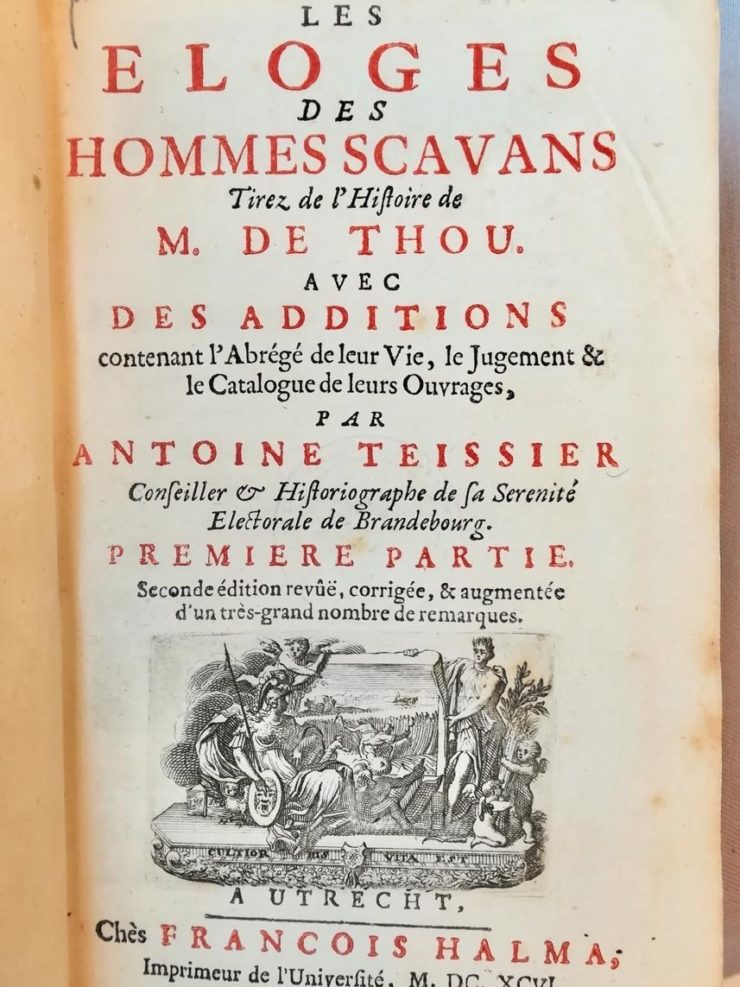 The rise of early modern biographical writing including vitae, commentarii and eulogies, began in Italy in the fifteenth century and became a widespread practice throughout early modern Europe. Authors of “lives” took a considerable amount of freedom in adapting the classical ancient models for biographies. This accounts for the inconsistency in form within the genre. The subjects included notable scholars, churchmen, courtiers and statesmen, among others.[1] However, the biographers did not only focus on their subjects. As historian James Weiss explains, they aimed to set an example by providing “moral instruction, political counsel, and argument for a wider agenda.”[2]

Les Eloges des hommes Sçavans tirez de l’Histoire de M. de Thou (“The eulogies of learned men extracted from the Histoire by De Thou”, 1696) is a late example of the tradition of early modern life-writing. Jacques Auguste de Thou (1553-1617) wrote many historical works which contained biographies, for example his Historia sui temporis (“History of his times”, 1604-1608).[3] Antoine Teissier collected and united these biographies in Les Eloges des hommes Sçavans, published for the first time in 1683 in Geneva. Teissier did not only assemble De Thou’s work, he also provided further information based on his own research and resources. It saw multiple reprints, for example this 1696 edition printed by Utrecht’s university printer François Halma (1653-1722). Pierre Bayle (1647-1706) published a review of the 1683 volumes in his Nouvelles de la République des Lettres (1684) wherein he praised the religious impartiality of the work, because it presented the lives of both Catholic and Protestant men.[4] On top of that, Les Eloges is not only unbiased with regards to confession, but also regarding the nationality of its subjects. Although the authors were French, Les Eloges did by no means contain a restrictive French canon of intellectuals. German, French and Italian scholars together constitute roughly three-quarters of all subjects in equal parts and other “nationalities” (Spanish, Portuguese, the Netherlands, Poland) are represented as well. This shows how De Thou and Teissier were oriented towards Europe, and not just France. 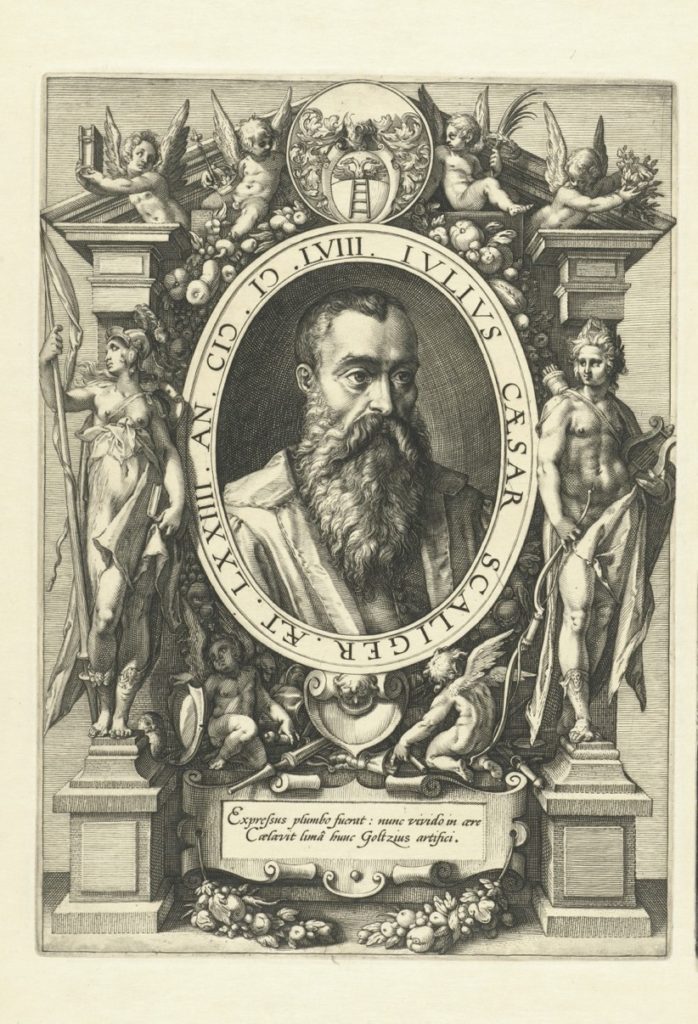 Teissier often used the authority of other sçavans – for example of Scévole de Sainte-Marthe (1536-1623), Theodorus Beza (1519-1605), and Paulus Manutius (1512-1574). In the margins, he cited the titles of the works he drew information from. One of the most frequently-mentioned scholars is Joseph Justus Scaliger in relation to his posthumously published tabletalks, the Scaligerana (1666-1669). Scaliger’s praises taken from the Scaligerana include calling Janus Dousa (1545-1604) “l’ornement du monde” and Gian Vicenzo Pinelli (1535-1601) “l’oracle du monde sçavant”.[5] Teissier’s reliance on the judgements of “le grand Scaliger” illustrates how he used the authority of others and connected his own name to theirs. The first volume also contains a eulogy for Joseph’s father, Julius Caesar Scaliger.[6] De Thou’s original eulogy of Scaliger is three pages long, whereas Teissier’s addition counts eleven pages. Teissier started off by further specifying Scaliger’s descent and profession – something he did in many cases where De Thou had not provided these details – and then devoted a paragraph to a description of Scaliger’s physical features. “Jules Scaliger étoit bien fait & de belle taille”, he wrote.[7] A description of the features of his son is offered a few pages later: “Joseph Scaliger avoit la taille médiocre (a mediocre size), le visage vénérable (a venerable face), les yeux pleins de feu (eyes full of fire), & le corps robuste (a strong body).”[8] Despite being a book dedicated to early modern scholarship, Teissier deemed his venerable face and eyes full of fire just as worthy to mention as his contributions to the learned world.

Descriptions like these drew on the ancient concept of physiognomics, the belief that man’s personality can be read from his physical (especially facial) features.[9] Physical portrayals in Renaissance biographies can be seen as a way of individualizing the subject, by highlighting one’s unique features, as well as a way to conform to the early modern belief that certain features were indicators of moral characteristics.[10] In the case of Julius and Joseph Scaliger, their appearances underline their genius. Joseph’s eyes full of fire are indicators of his diligence in his studies – according to Teissier, he often passed entire days studying in his room without eating.[11] His burning passion for learning is also reflected in his fiery eyes. 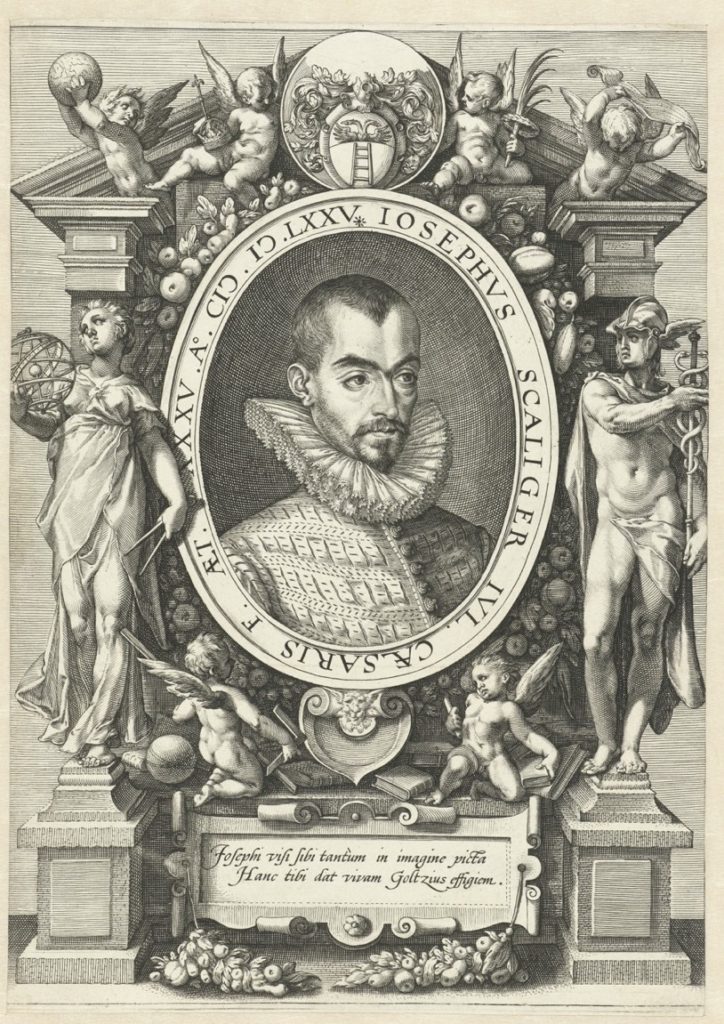 Teissier also mentioned the discussion concerning the noble descent of the Scaliger family.[12] Joseph Scaliger claimed to descend from a noble Veronese family, the Della Scala’s, but contemporaries contested this, pointing out that he in fact descended from a man called Bordone. The inventor of “cette fable” was, according to Teissier, Augustin Niphus, while others point to Melchior Guillandin as the one who initiated this discussion. Teissier evidently believed Scaliger’s claim and committed himself to openly supporting him. Although people disputed the Scaliger’s nobility, no one dared to attack Julius’s “erudition extraordinaire & son sçavoir universel” Teissier wrote that all learned men held him “pour un grand Philosophe, pour un excellent Médecin, & pour un judicieux (wise) Critique”.[13] Some treated him an author above all others of their age, some compared him to divine heroes, and some called him not only the Prince of Verona, but the Prince “de tous les Sçavans”.[14]

Although Teissier had a great admiration for the Scaligers, the example of Julius also shows that “les plus grands hommes sont sujets aux plus grands foiblesses” (the greatest men are subject to the greatest weaknesses).[15] Julius Scaliger wrote against Erasmus with “tant d’aigreur (bitterness) & de vehemence” that even his most zealous supporters could not excuse him for this. He called Erasmus a “parasite, yvrogne (drunkard), bête (beast), furie (fury), bourreau (executioner), avare (avaricious), arrogant, fol (mad), l’écueuil de la Religion (the danger of religion), la tâche de l’Eloquence (the stain of eloquence), la vipére du genre humain (the snake of the human race)”.[16] Teissier quickly added that Scaliger did manage to somewhat correct this mistake, because he later claimed he regretted what had passed between him and Erasmus, and even showed “l’estime qu’il faisoit de ce grand personage” (the admiration he had for this great character).[17]

The insults made by Julius Scaliger and the features of his son Joseph are examples of remarkable details in early modern life-writing. Still, the genre did more than only provide us with intriguing particularities. It also gives an insight into the networks and social status of early modern scholars. Teissier’s reliance on the judgement of other notable intellectuals underlines the importance of connections within the scholarly community. These volumes by De Thou and Teissier also give, albeit selectively, an overview of a sixteenth-century network of learned men that extended itself beyond national borders. Both volumes reflect an ambition to chronicle a learned community that is ideally indifferent to national or confessional affiliations. Although these works may seem to be all about appearances and insults, they are at the same time valuable resources to better understand the reach and ideals of the early modern learned world.